Skip to navigation Skip to content
Your Cart
Free Shipping on all U.S. Orders Over $50 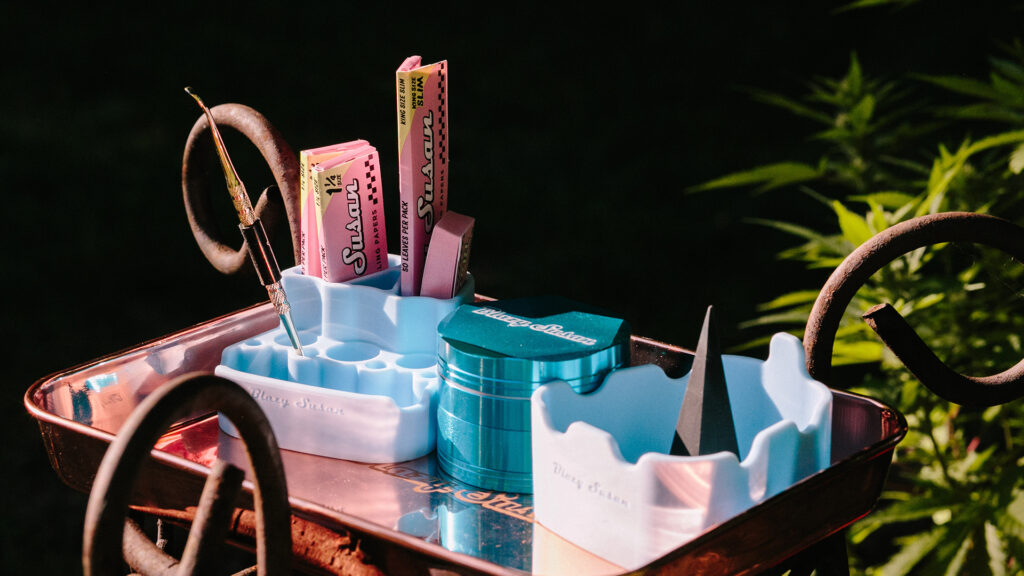 Welcome to another installment of our Blazy 101 series! These 101 posts are designed to help beginners get the most out of their smoking experience.

Adapter: Commonly found on metal pipes, adapters change the angle, or size of the pipe. Most will have at least one adapter where the long stem connects to the bowl.

Atomizer: This is the heating element on a vape. An electrical charge heats it, which then heats the wick or dry herb material, which is what releases the smoke or vapor you inhale.

Bong: One of the most known types of water pipes. A bong has a mouthpiece that is typically a tube with water in the base. A stem rises at an angle from the water, through the wall of the pipe and ends with a fixed or removable bowl where your smoking material is placed.

Bowl: The bowl-shaped area your smoking material is placed in to burn. Bowl is also used as an informal unit of measurement as in “I smoked a bowl.”

Carb: A tiny hole molded or drilled into the side of a pipe that lets you control the flow of cool, clean air. Your thumb or finger covers the hole while you heat and draw the smoking material, then the carb is uncovered to allow outside air to “chase” the accumulated smoke into your lungs.

Chillum: A straight glass pipe. No carb. No complications. It allows a similar experience to smoking a rolled substance without the need for rolling materials.

Cone: Also called pre-rolled cones. A cone is an empty roll of paper ready to be filled with the smoking herb of your choice. Just fill it, twist the end, and you are ready to go. These are not to be confused with pre-rolls that have already been filled.

Dab rig: A dab rig is a bubbler style pipe designed for oils and waxes. Similar in theory to a bong, a “nail” is used to heat your concentrate, and it may require other pieces like a vapor dome depending on its design.

Dabber: Also known as a Dab Tool. A small, usually metal tool used to scoop up concentrates for dabbing. It often looks like a small spoon.

Dab Pads:  Also known as Dab Mats, are placed underneath a dab rig in order to protect the surface from any residue that may drip off the dab nail.

Diffusion: The process of the smoke spreading out through water in water pipes by means of percs and other contraptions. This cools the smoke, making it cooler and more refined.

Dome: A glass piece that goes over the nail on a dab rig, trapping the vapor so it’s forced through your bubbler.

Downstem: A long skinny tube that directs the smoke into the water pipe. They come in two styles, fixed and removable.

Dry piece: A pipe that does not use water. They come in a wide array of shapes, sizes, colors, and styles.

Filter / screen: These metal or glass inserts go into the base of your bowl and help keep ash or burning embers from escaping the bowl into your water or pipe stem.

Glass blunt: A straight, hollow glass pipe with a second hollow tube used as a mouthpiece. They are a slightly more complicated version of a chillum.

Grinder: Grinders are used to grind herb into smaller pieces for better rolling or packing. You have a couple different types of grinders, the basic 2-piece grinder and the industry standard 4-piece grinder. These four-piece grinders have three separate chambers. Upper chamber, middle chamber, and pollen chamber.

Hand pipe: A glass or metal pipe small enough to fit in your hand for a discreet smoking experience. They are generally one of the first pipes new smokers end up with due to their simple operation.

Nail: Made from titanium, quartz, glass, or ceramic in most cases, a nail is used to heat the concentrate in a dab rig, usually with a small butane torch.

Percolator: A small disk positioned in a bong or water pipe that helps diffuse the smoke through the water. This also creates a bubbling effect.

Pinch hitter : Also known as a one-hitter; a small metal tube with a tiny built-in bowl, often painted to resemble a cigarette and fits into a ‘dugout’ wooden container with two holes inside, one for the mini pipe, and the other for the smoking material. Pinch hitters are often sold separately as well.

Piece: General slang for a pipe of some sort. For example, a glass piece is a glass pipe.

Quartz: Quartz glass is more resistant to heat changes than borosilicate, decreasing the likelihood of thermal changes causing cracking or shattering. However, it is less resistant to damage from shock.

Recycler: A water pipe that draws smoke and water from chamber to chamber before returning it to the main chamber, thus providing a continuous filtration loop to cool the smoke without allowing water to rise into the mouthpiece.

Rolling paper: Thin sheets of paper made from plant fibers. Your choice of herb or smoking material is placed on it before rolling to create a cigarette-style smoke.

Silicone: A material increasingly used in the construction of bongs and rigs. It is flexible, shatterproof, heat resistant, and comes in a variety of colors.

Slide: A “bong slide” or “bong bowl” is a type of removable bowl used in bongs. It fits into the down stem and is commonly found on bongs without carbs.

Spoon pipe:  A style of pipe named for its spoon shape.

Vaporizer: Often referred to as a vape, this product uses an electronic heating element to vaporize concentrates or dry matter for consumption rather than using direct heat to create smoke.

Water pipe: A pipe that uses water to diffuse smoke. This is a broad term that includes bongs, bubblers, and other styles that force smoke through water in order to cool and purify it.

These are just a few of the more popular terms you may hear in the smoking community. If you have any questions, or are unsure about a certain smoking phrase, please reach out to us using the form below and don’t forget to tag us @BlazySusan with your favorite smoking piece!

Keep an Eye Out For New Products and Promotions

That’s it for us! As always, if you have any questions about smoking accessories or anything else Blazy-related, feel free to email us at help@blazysusan.com.

Keep up with new product announcements, exclusive deals and giveaways, behind the scenes action from Blazy HQ, and more.

Recent Posts
Categories
The Blazy Bulletin
Sign up to get 20% off!
Sign up now to receive a code for 20% off your first order, and get new product announcements, exclusive deals and giveaways, behind the scenes action from Blazy HQ, and more. No spam!

Can’t find what you need? Contact our customer support team for help.